East Lothian is one of Scotlands best known golfing regions lying on the southern shore of the 'Firth of Forth'. To the north across the firth is its famous neighbour the 'Kingdom of Fife' & St Andrews. And 40km to the west is the city of Edinburgh.

The most famous club in East Lothian is 'The Honourable Company of Edinburgh Golfers' Muirfield Golf Club, which dates back to 1744 at its original location in Leith. It made its final move to East Lothian in 1891 when it settled at its current located at Muirfield Golf Club. Muirfield has held 16 Open Championships with the most recent being in 2013 and was won by Phil Michelson.

The other big draw card in the region is North Berwick Golf Club, its 'West Links' is synonymous with quirky golf. Some of its features will astound the first time player! At the other end of the town is the 'East Links' The Glen Golf Club which has a more cliff top setting and less links like. Its views across to Bass Rock are phenomenal.

The list of great golf goes on with the 3 courses at Gullane, host to several Scottish Opens. The authentic links at Kilspindie, Craigielaw Golf Club and Longniddry Golf Club with its views of Edinburgh city to name a few.

The area also has some modern classics with The Renaissance Club and Archerfield Links offering a more country club style of golf. At the far end of East Lothian is the superb Dunbar Golf Club.

The best known accommodation in East Lothian is the Marine Hotel which overlooks North Berwick Golf Club. And Greywalls Hotel which is located next to Muirfield Golf Clubs clubhouse, it is a treasure trove of Open Championship memorabilia. There are several other wonderful hotels in the area such as the Nether Abbey and Bonnie Badger.  And for the more budget conscious traveler is Craigielaw Lodge and Duck's Inn the perfect location.

East Lothian is perfect to combine a golf and city trip to Edinburgh or other regions of Scotland. 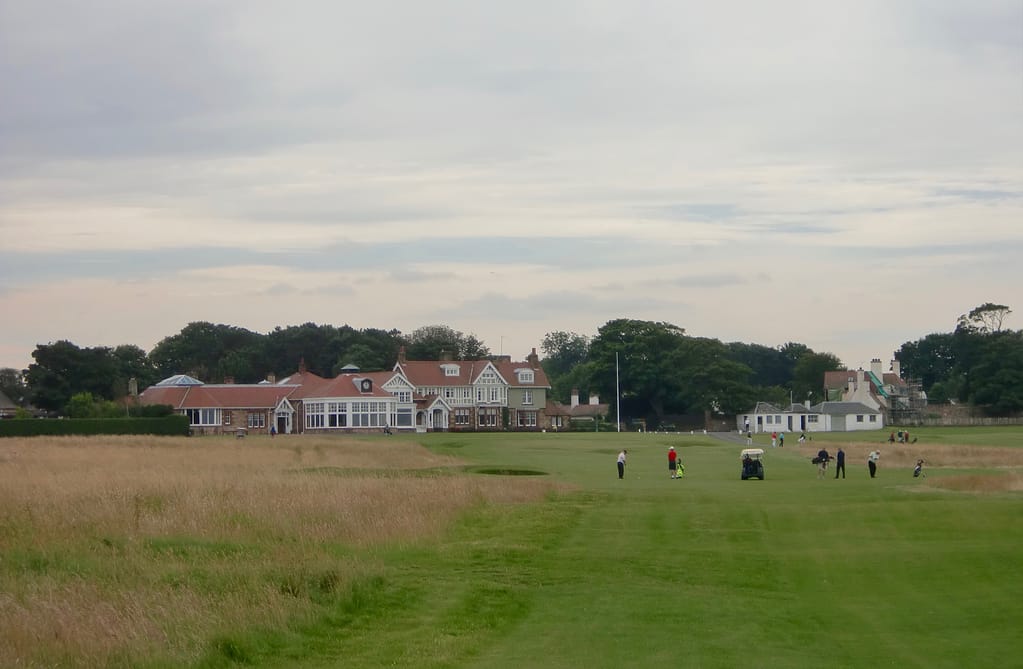 Muirfield Golf Club 7245 yards Par 71, Muirfield is one of the worlds great links courses which has hosted 16 Open Championships over its history with a very impressive list of winners. The Honourable Company of Edinburgh Golfers moved to the Muirfield course in 1891 when Old Tom Morris was asked to design the course. In 1928 it was again altered by Harry Colt and Tom Simpson which made it into the links it is today. The routing of the course was very unique especially for the time with the course being arranged in two loops one inside the other and heads in the opposite directions which makes judging the wind a constant challenge. 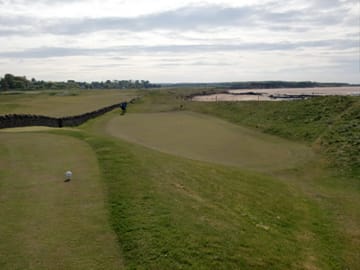 North Berwick Golf Club 6506 yards Par 71, North Berwick is one of the great experiences in the world of golf. The course is similar to St Andrews in many ways including how it plays 9 holes out & 9 holes back into the town to a club that is reminiscent of the clubhouse of R & A at StAndrews. North Berwick is famous for being quirky with such famous holes as "The Pit", "Redan" and the extremely crazy 16th hole "Gate" which has a green with two tiers with a massive swale in between. The other feature of the course is the way a rock wall comes regularly into play.

Craigielaw is one of East Lothian newer courses having been opened for play in 2001 and was designed by Donald Steel. The course doesn't have the dune system running through it that some do but don't let let that fool you, its home to some wonderful links golf. Craigielaw also has superb lodge style accommodation.

Longniddry Golf Club 6260 yards Par 68, Longniddry is a mix of links golf and holes through Pine trees. The course has some wonderful holes and great views of Edinburgh itself.

Dunbar Golf Club 6597 yards Par 71, Dunbar is the most easterly course in East Lothian and a fine example of links golf. A great place to visit when your in the region.

Glen Golf Club 6275 yards Par 70, The Glen or East Links is more of a cliff top course then a pure links but either way its a lovely course with stunning views over the Firth of Forth and the town of North Berwick. Not an overly long course but certainly a challenge to golfers of all levels.

Kilspindie Golf Club 5030 yards Par 69, A wonderful compact links course that can be played in just 2 1/2 hours. Although not long it is a lot of fun and is a true hidden gem.

The Nether Abbey Hotel is perfectly situated in North Berwick, East Lothian, to offer comfortable, modern accommodation and food of the highest quality. Whether you are touring, on holiday or looking forward to a round of golf on any of the numerous golf courses on the Edinburgh Golf Coast (we have two courses here in North Berwick) we are here to serve. Our 12 bedrooms have all recently been completely refurbished, as has our bar and lounge. If you are a golfer, each bedroom has a locker for your golf equipment and we also offer drying facilities. So, after a long day's golf, relax with a drink and a wonderful meal.

In the heart of East Lothian's coastal village of Gullane, The Bonnie Badger is the new charming hotel with a pub, restaurant, rooms and garden created by husband and wife team, Tom & Michaela Kitchin. The charming site of The Bonnie Badger has always played an important part in the village life, dating back to 1836 when it first opened as an Inn. After an extensive renovation and refurbishment undertaken by the Kitchin family, The Bonnie Badger proudly opened its doors in December 2018. The Hotel has undertaken a significant transformation, restoring and displaying many of the building’s original charm and features. The main house proudly expresses a genuine home away from home ethos where guests instantly connect with its charming and beautifully reinstated décor.

Just 30 minutes from Edinburgh and its airport, you'll be in Ducks unique traditional bar relaxing with a whisky or real ale. Meet by Ducks friendly welcoming staff, we will show you up to your accommodation in the heart of the historic village if Aberlady. Built in 1638, our rooms are a mix of twins and doubles all with showers and most with baths too, just what you need after a long day on the golf course, coastal walk, bird watching or after a boat trip to the Isle of May or the Bass Rock.

The Lodge at Craigielaw is a fantastic base to enjoy the wonderful facilities at Craigielaw Golf Club as well as exploring the golfing county of East Lothian and all the attractions of Scotland's capital city Edinburgh. Attached to the clubhouse, the lodge boasts 25 well appointed rooms which can be set up on a double or twin format. 13 rooms enjoy views across the course to the River Forth, Gullane Golf Courses and the kingdom of Fife, whilst 12 rooms enjoy the quiet and secluded view across a decorative courtyard.

Greywalls Hotel is uniquely situated on the edge of Muirfield championship golf course with stunning views over East Lothian and the Firth of Forth. Overlooking the world famous greens of the 9th & 18th holes, it has earned itself a reputation as 'a golfers' paradise'!

The hotel is directly opposite 13th century Dirleton castle with an open outlook to the village green. The Open Arms hotel – established in 1947 – was started with the premise of friendly service, good food and drink and comfort. Today, over 70 years later, the still privately family owned hotel, adheres to those values. Our chefs take pride in their dishes and the busy restaurant, where locals and guests can relax and enjoy beautifully prepared good food, is a testament to their skill. locally grown and made food and drink are served, where possible.
This website uses cookies to improve your experience. We'll assume you're ok with this, but you can opt-out if you wish.Cookies allowed I would like to use a minimal amount of cookies Read More
Privacy & Cookies policy