In golfing terms Wales flies under the radar compared to other regions of the British Isles! The first golf courses were built in the 1870's and at last count there were around 200 golf clubs. Golf in Wales greatest moment came in 2010 when they hosted the Ryder Cup at Celtic Manor. The European team was captained by the Welshman Ian Woosnam who led the team to a wonderful victory over the Americans. Wales is blessed with over 1200 km’s of stunning coast line, much of which is ideal for golf. This makes the journey between the courses half the fun. Combine a road and a golf trip to see Wales at its best!

Starting on the south coast you’ll find arguably Wales best course, Royal Porthcawl, venue to the 2014 & 17 Senior British Open Championship. Further along the coast are the links of Pyle & Kenfig, Ashburnham and the legendary Pennard Golf Club, known as 'The Links in the Sky’. The other highlights on the coast are Tenby, and Britains finest downland course, Southerndown Golf Club. Last but not least is Celtic Manor, which hosted the 2010 Ryder Cup and is home to three fine parkland courses and ***** Resort style accommodation. Located conveniently just 25 min north east from Cardiff city centre

On the west coast are two of the most natural links courses in the world, Borth & Ynyslas and Aberdovey Golf Clubs. The highlights in the north are Royal St Davids at Harlech, Porthmadog, and the 27 holes of Nefyn & District. The later being built out on a peninsular, the magnificent views are reminiscent of Old Head in Ireland. And at the very top of Wales are the fabulous Bull Bay, Holyhead, Conwy and North Wales Golf Clubs. These courses can also be played en route to Ireland with the ferry, which departs from Holyhead.

South Wales can be easily reached by air via Cardiff or Bristol Airports. And North Wales is best accessed via Manchester & Liverpool Airports.

If you haven't played golf in Wales yet, you are really missing out on something! 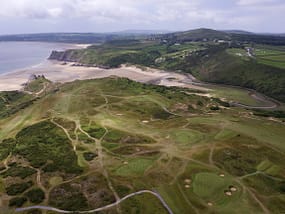 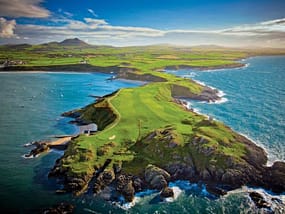